W-1's original roster was made up of fighters loyal to Mutoh, who left AJPW in 2013. keiji mutoh He defined his company's style as "Fighting Entertainment" to differentiate it from AJPW's traditional practice.

wrestle-1  was a promotion of Japanese professional wrestling, founded by keiji mutoh after his resignation to AJPW in the so-called third schism that the veteran company suffered.

Thirteen years after the second mass exodus it suffered AJPW, commanded by Mitsuharu Misawa, history repeated itself for the third time. Keiji Mutoh, who moved to AJPW after Misawa left, and who held shares in the league as well as the position of president, shocked the wrestling world with the announcement that he would leave the booming company and establish his own. draft.

Along with 10 other wrestlers and 3 dojo students, Mutoh parted ways with AJPW after the big event on June 30, 2013 at the Sumo Hall, splitting the veteran company into two fronts and ending the era of "Pro Wrestling Love” from the oldest Japanese professional wrestling company.

The new Mutoh promotion was called wrestle-1 (W-1, W stands for Wrestling, World Wide, Win, Wonderment) and began in September 2013 with a debut show at Tokyo Dome City Hall. With the name of the new company, Mutoh, which led W-1 as owner and president, took up one of his old projects.

In the years 2002 to 2005 four shows were organized under the motto WRESTLE-1. Back then, in cooperation with K-1 and PRIDE FC, WRESTLE-1 stood out with great arena shows, stars from various sports (wrestling, MMA, and kickboxing), expensive stages, effects, and packed houses. The WRESTLE-1 concept was then defined as a company that practiced an open door policy. Mutoh planned to collaborate with other companies to host dream matches.

Mutoh's ambitious plan was to present luchistic entertainment with lavish effects and grand shows. W-1 would expand to Taiwan, Hong Kong and Singapore and, in addition to the men's roster matches, it would also host a women's division.

In mid-July 2014, Wrestle-1 partnered with TNA, this led to Mutoh's special appearance in October at the event Bound for Glory.

In February 2015, the cruiserweight division was created, with its own championship, which was added to the heavyweight and couples division. By March, the Wrestle-1 management had several resignations, so Mutoh offered to Sanshiro takagi, president of DDT a job in the management of your company. By April the sub-brand was created, Wrestle-1 Starting Point which promoted functions of the youth of the Dojo. On May 5, Takagi was introduced as the CEO of Wrestle-1. Their goal was to make the promotion more profitable by increasing sales and increasing the number of shows. A week later, seiya healed He finished his contract and went to North America to work as a freelancer. Also, the relationship between W-1 and TNA ended.

On March 30, 2016, Wrestle-1 held a show to celebrate the completion of the first course at the Dojo, while announcing the graduation of hana kimura, Jun Tonshō, reika saki and Seigo Tachibana. With two women graduating, Keiji Mutoh considered starting a women's division. On May 4, the president of AJPW, Jun Akiyama, made a surprise appearance for Wrestle-1, facing Keiji Mutoh, and the two agreed to a tag team match for August 11. Thus Mutoh returned to have a rapprochement with AJPW three years after leaving there. In September it was announced Pro Wrestling ACE, with the participation of the company's newbies.

The following year was crucial, as changes occurred in the corporate structure. Kaz hayashi became chairman, Keiji Mutoh remained chairman of the Administrative Board,  Shuji kondo, took over the vice-presidency and Sanshiro Takagi, remained only as an advisor. The Result Championship was created, for the youngest fighters and Mutoh developed its next project, the sub-brand M, where he presented the great legends of Japanese wrestling, several of them in retirement or semi-retirement.

Keiji Mutoh's knee injuries forced him to participate less in functions, until in 2018 he underwent patella replacement surgery on both legs stemming from degenerative osteoarthritis. Although Mutoh later returned to the activity, it was sporadic.

In March 2020, at a press conference, Kaz Hayashi and Keiji Mutoh announced the suspension of Wrestle-1 activities indefinitely. The inability to solve the economic problems was the main cause, after W-1 had survived thanks to one of the shareholders of GEN Entertainment Ltd., a partner consortium of Mutoh, had absorbed the losses. The Dojo and the foreign fighter residency program also came to an end.

The last function of the company was on April 1, behind closed doors for the Coronavirus Pandemic, Keiji Mutoh participated in the semifinal fight. A day before the contract of the fighters squad ended, who remained as free agents.

How to watch Wrestle-1 performances 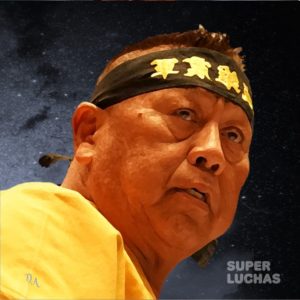 Masashi Aoyagi passed away at the age of 65, after a fruitful career in professional wrestling and karate. 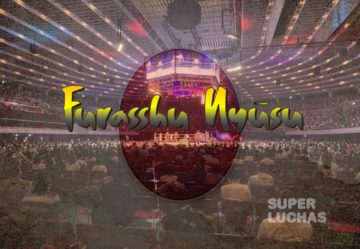 After more than a year of absence, he returns for you Furasshu nyūsu 01 (フラッシュニュース) “news flash”, with the highlights of the brief news of Japanese Wrestling. 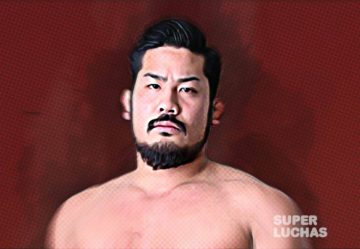 Shoutaro Ashino was one of the young promises that were forged in the school of wrestle-1, student of the legendary Keiji Mutoh and that at a certain moment it became the face of the company. 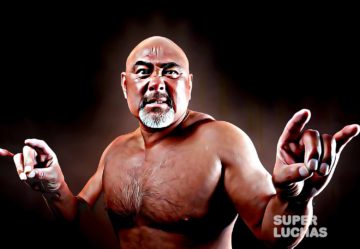 At the beginning of April it was carried out the latest feature of the company Wrestle-1, after an indefinite closure of the company was announced after almost seven years of activity. In this way, the legendary keiji mutoh He saw the company he founded stop after leaving AJPW. 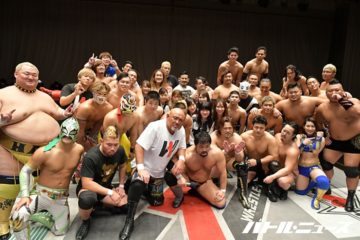 "Tour 2020 Trans Magic - Last Match” was the last official event of wrestle-1 before the company ceased its activity indefinitely. Due to the current crisis situation of the Coronavirus, sadly, The event took place in front of an empty Korakuen Hall. 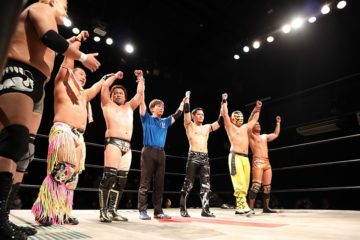 The Shin-Kiba 1st RING was the stage for the goodbye mini tour "WRESTLE-1 Tour 2020 Trans Magic” which will be made up of two days. 270 fans gathered. 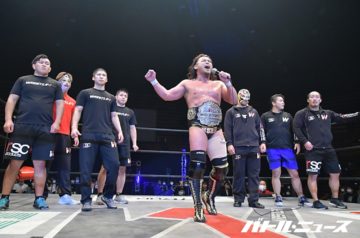 The Ota City General Gymnasium was the venue where it took place "Wrestle Wars 2020“, the great function of wrestle-1 where three championships were played. 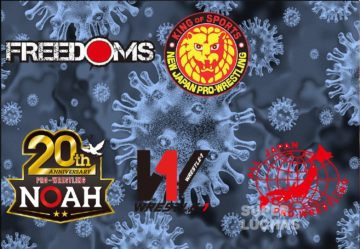 One of the first countries to be affected by the Coronavirus pandemic (COVID-19) was Japan., largely due to its proximity to China, the country of origin of this health crisis. 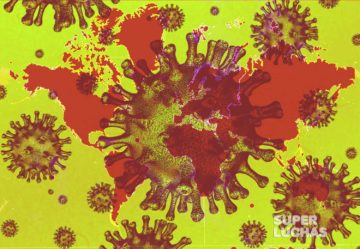 The second global pandemic of this XNUMXst century cruelly lashes human beings. The traces of 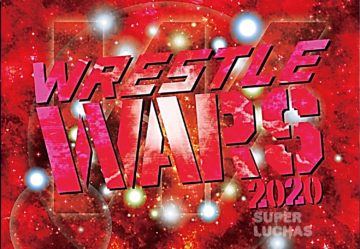 It will be at the Ota City General Gymnasium in Tokyo the venue that will house what is so far the last official function of Wrestle-1, "Wrestle Wars 2020“, prior to the announced indefinite suspension of activities scheduled from April 1.

keiji mutoh organized one more function of "Pro Wrestling Masters” his side project to wrestle-1 where the veteran stars of Japanese wrestling performed. This time he had the super stellar presence of the legend Antonio Inoki, who in this 2020 celebrates 60 years of his professional debut.

La coronavirus spread and efforts to contain it are causing each time more cancellations of functions in the Japanese professional struggle. Most of the leagues have closed or stopped operating from the end of February until mid-March, the situation seems to have improved only to a certain extent but this led to more cancellations

In a press conference, Kaz hayashi y keiji mutoh, president and founder of the company, respectively, announced that all Wrestle-1 activities, following the April 1 show at Tokyo Korakuen Hall, are suspended indefinitely. 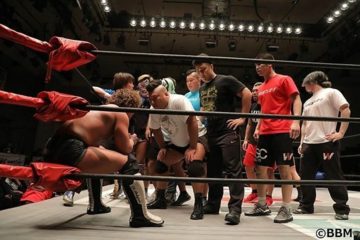 The tour continues “Tour 2020 W-Impact"Of wrestle-1 and this time it was time to stop at Tokyo Korakuen Hall, with a fight for the top title of the company. 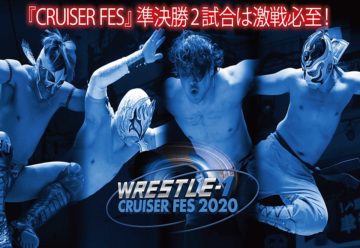 Inside the tour2020 Sunrise Tour"the tournament continued in development"WRESTLE-1 Cruiser Fes 2020“, where the fighters who would reach the next instance were outlined. 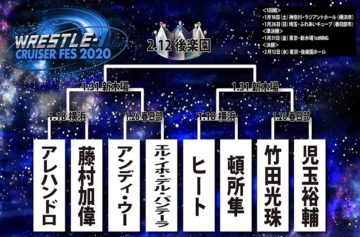 The tournament startedWrestle-1 Cruiser Fes 2020", the individual competence of wrestle-1 as part of the tour2020 Sunrise Tour“, where the first matches of the first round took place. 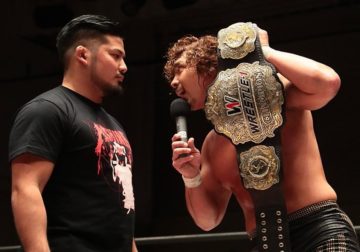 The Korakuen Hall was the venue for wrestle-1 had their opening performance of 2020 and the tour"2020 Sunrise Tour“, with title fights. 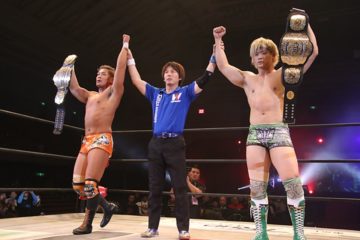 The EDION Arena in Osaka was the setting for the great show "Wonder carnival“, which jointly organized the companies wrestle-1, AJPW y Dragon gate, with the participation of fighters from several companies. 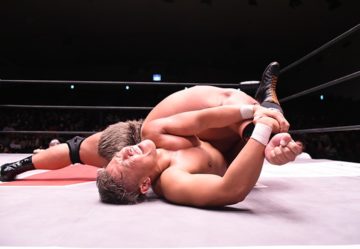 The traditional Tokyo Korakuen Hall was the venue for wrestle-1 will close the year with its event "Tour 2019 Shining Winter” where three titles were put in dispute. 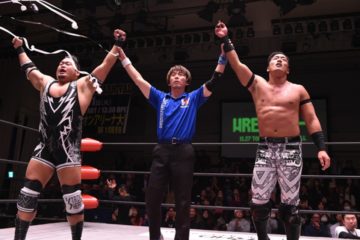 wrestle-1 performed at Korakuen Hall in Tokyo as part of the “Wrestle-1 Tour 2019 Autumn Bout“. where the tournament ended Wrestle-1 Tag League 2019.